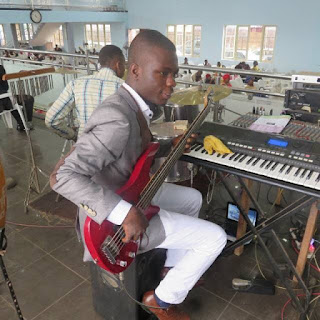 This is a simple approach to accompanying a singer on your instrument Piano, Guitar and so on…We are basically going to look into a few theories and bring out some tricks inside that will basically help you to accompany your singer according to the general standard.
One of the advantages is that the right progression (Accompaniment) gets the audience into the right mood/atmosphere to be blessed while the wrong progression also in its own capacity brings the audience’s spirit down/ causes disconnection so this has to be averted by all means.

APPROACHING THE SIMPLE CHORDS
Now lets start by deciphering the basics of Chords in music, Chords generally come up from a defined scale e.g. Major scale where we have the three primary Major chords I,IV,V and then the minor scale where we have the various minor chords, the Diminished scales where the diminished chords(formed in minor thirds) are being generated and so on.
IN THE TABLE BELOW WE HAVE THE THREE BASIC PRIMARY CHORDS IN THE KEY OF C

OBJECTIVES: REPLACE YOUR BASIC TRIADS WITH THE SEVENTH CHORDS

Now let us briefly look into there seventh form, to create more matured sounds musicians prefer to use the above chords(Triads) above in there seventh forms or extended as we have extensions like 9th,11th ,13th e.g.C major, C Major7,Cmajor9,Cmajor11,Cmajor13 and so on for the minor chords also e.g. C minor 9… Basically the formula for a seventh chord is 1+3+5+7 ok…lets peep into the C major scale to shed more light on this:

*TRY ON YOUR KEYBOARD* TIPS:
Basically a 1 4 5 progression will almost fit into any song you are accompanying but there will be a lot of empty space that a pro would have filled.
LETS CONFIRM THAT WITH THIS SIMPLE SONG ‘PRAYER IS THE KEY’
TONIC SOLFA:- D,D,D,R,M-D,R,D,L,S-D,D,D,R,M-S-R…S,F,M,M,R,M,D-D,R,D,L,D,S-S,S,D,F,M,R-D

1. Keys to Normal Praise and worship songs
2. Praise and Worship songs in the Natural Minor
3. How to accompany a singer with your Piano or guitar