HOW TO ACCOMPANY A SINGER 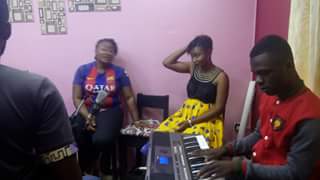 Accompaning a singer bsasically denotes playing the right chord/underlaying such chords on the song the singer is singing, with the right beat, tempo.
As much as this is nothing hard but it has to be properly learnt so as not to get it the wrong way…Its about getting to play the right chord progressions/movements for each song(worship/praise).

There is this general rule that most songs follow, basically as a matter of fact composers who composed the songs you want to accompany followed same rule while composing the same song and that is the rule of CIRCLE OF FOURTHS/FIFTHS.

Majorly we will be considering the circle of fourths in this series.

TIME TO PRACTISE GET ON THE Keys.

NOW THAT’S THE TRICK OF CIRCLE OF FOURTHS BASICALLY THE PROGRESSION MOVES IN FOURTH.

Examples of fourth movements in C

The circle of fourths (or circle of fifths) is the relationship among the 12 tones of the chromatic scale, there corresponding key signatures, and the associated major and minor keys.

Musicians and Composers use the circle of fifths to understand and describe the musical relationships among some selection of those pitches. E.g. with the knowledge of the circle you can easily move/modulate from C major to A minor or say from G major to E minor and you won’t make a bad sound because they are related and we could easily attribute that idea to the Circles.

With the knowledge of the circles, there is this Contemporary song in a minor key Lord you are Holy by Helen Baylor in the key of C minor, approaching such songs will physically look like you are playing from the key Eb Major and that’s because of the relationship between them [Eb major~C minor] 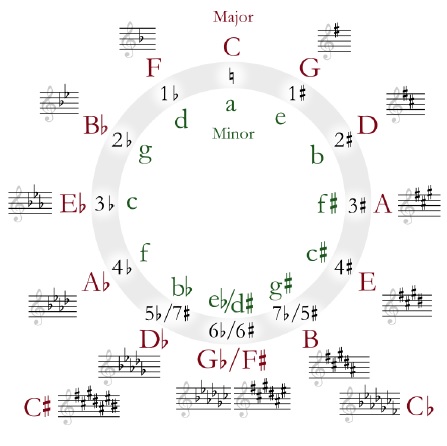 Most songs that you accompany day by day fall on this fourth movements…e.g. As the Deer, panteth for…the water so my heart longeth after thee… CAN BE ACCOMPANIED THIS WAY

IN THE KEY OF C MAJOR

NB: immediately the song started on the first Degree/Tonic that’s the major key C it followed fourths movement basically until the last two bars where the song had to resolve so has to pick the lines , basically the composer contacted the circle of fourth charts before composing esp the melody notes: m,s,s,m,r,d: r,f,m,r,d: l`,l,l,s,f,s,..

Example in the key of C 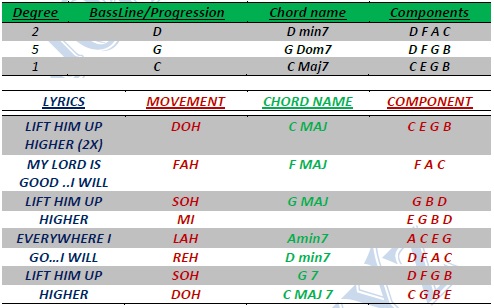 Most times the 2 – 5 -1 progression helps in ending a song… we will check that out in the progressions below:

There is this common progression in Praise Songs 4-5-3-6-2-5-1 lets make out something from this common praise song…LIFT HIM UP HIGHER!!!

HOW TO DETERMINE WHICH CHORD TO PLAY PER TIME

Determining which chord to use to accompany or back up a singer majorly depends on the melody line of the song the singer is singing at present, Each melody note commons from a particular major or minor chord.
Let us consider the first line of As the deer …Melody notes…m,s,s definitely this can onlhy be found in the chord : Doh: m: soh… and that’s how to determine which chord goes per time by considering the melody note per time For instance, if the melody notes were r,f,m,f,m might have considered the following chords r:f:l(2), f:l:d(4), l:d:m(6), l:d:f(4INV)

THE CULTURE OF VAMPING

After learning how to accompany a singer the next question that might arise is about the Vamping; the repeated use of a phrase through an entire song or the improvisation on top of a repeated phrase through a song. looping, samples and grooves are all examples of vamping, as is almost all popular music with repeated chord progression, it simply implies building on top of a groove to create a song …*A short repeated chord progression, often serving as the introduction of a performance.
e.g. you can vamp a 6 2 5 1 progression

One of the most important skill a keyboardist must possess in this Course is the ability to play by Ear, being able to pick musical note just by hearing there sound
Basic exercise for achieving this is by running (HUMMING) your Major scale Ascending and Descending everyday.

1. Keys to Normal Praise and worship songs
2. Praise and Worship songs in the Natural Minor
3. How to accompany a singer with your Piano or guitar