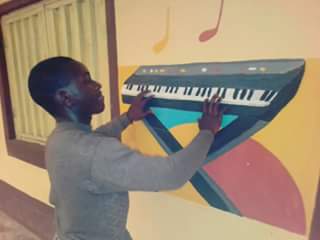 You were looking for how to impress her, then she told you she loves music and also love men that can play the piano.
Gbam! Iwochaluuuuu! “Baby,that one na small thing, I’m a piano wizard na!”, u said.obviously she got impressed and Started catching feelings small small.

Another day, you wanted to see her, she told u she’s in the church for choir rehearsals, that you can come there and see her.
You came to the church, sitting at a corner waiting for her, she comes where u were sitting and the next thing u heard was “baby please come and help us play the piano,our keyboardist disappointed us”.
Suddenly your head started spinning, and sweat started gathering beneath your boxers.Unknown to u, before your arrival, she has already told her friends that you are a piano wizard (as you said), so everybody was eagerly waiting for the wizard to come and manifest.
She’s a girl that you are crushing on, so you wouldn’t want to mess with your chances of winning her over. You stood up, sauntered to the piano stand like a 4 year boy that was forced to drink alomo bitters mixed with weed.

You Sat on the piano seat, for 5 minutes, you were mopping at the keys wondering why the white ones are longer than the black ones, and which ones are meant to be pressed.
By then, all your ancestors are already standing in a single file with their hands on their neighbours’ shoulders waiting to be disgraced one after the other by you.
You girlfriend’s friends are already pressurizing her to tell you to start playing ,and she goes like ” baby what are u doing na?”
You vigorously shake your head to get a clearer vision of the keyboards as if u ve not been seeing them before, you raise all your ten fingers like a lion that wants to pounce on an antelope.
“daaaaaaang!…..grrrrrrrrrrr! Daaaaaaang!!” “Daaaaaaang……ntuwaaaaaa! Daaaaaaang!!” “daaaaaaang”,for ten minutes that was all they were hearing from the piano.

As you raised your head to see their reactions, you saw nobody there, I guessed they deserted you to rehearse with your fellow wizards..
Next thing,Your phone beeped, it’s a message from your supposed girlfriend and it reads, “Don’t ever in your life call my number again!, you are truly a wizard and what u need is a witch, and I am not one…