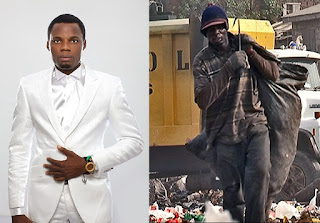 “It’s not a crime to clean the gutter,” the one-time Lagos-based scavenger says, “but ensure you don’t continue to remain in the gutter.”
His grass-to-grace story resembles that of the star international footballer, Odion Ighalo, the veteran footballer, Taribo West, or the ace musician and Galala dance exponent, Daddy Showkey.
These are stars that were born and raised in the slum of Ajegunle, Lagos. They, however, rose above the stigma of being ‘nobody’ to becoming Very Important Persons (VIPs). Today, their stories have turned out to be something of an inspiring tonic to millions of youths struggling in several ghettos sprawled all over Lagos and even beyond.
Like Ighalo who played on an empty stomach at the notorious Maracana Stadium before hugging the limelight or Daddy Showkey who was a street boxer, Mr. Eric Obuh a.k.a Vocal Slender spent most of his growing-up years as a street urchin mingling with thugs.
But today, the once dirty forager trying to eke out a living in the mire of refuse dumps has morphed into not only a popular musician and thriving entrepreneur-dealer in cars but also a powerful motivational speaker. His story is another testament that dreams do come true when and where you least expect it.

How he got his name ‘Vocal Slender’

Residents living around Prince Fadina Street, Ajegunle, Lagos, are all too familiar with Eric Obuh. He’s a well-respected youth leader in the community. But be warned. They don’t know him by that name. In fact, you could get lost if you walked into the community asking for Eric Obuh. First, you would get a queer stare from members of the community who would, after scratching their hairs, tell you that they don’t know the person you are talking about or that the fellow you refer to by such a name does not live in their neighbourhood. But mention Vocal Slender and watch a three-year-old child excitedly point you to a cream-coloured bungalow, the place of his abode.
Standing tall at 6 ft 2”, blessed with a hulky frame, chubby cheeks and calm mien, Eric Obuh’s look belies his alias ‘Vocal Slender’. “Slender was what they called me back then on the streets because I was very lanky. I didn’t call myself that”, he said with a shrug. “I added ‘Vocal’ to show that I’m out to voice out against the oppression and neglect of the poor and the vulnerable.”

From plenty to penury

Touching story of how Asa got her first recording deal