After learning to do all the exercises that you have been given, there are a three basic techniques that you should add to your playing, they will add a little feel to your rhythm. 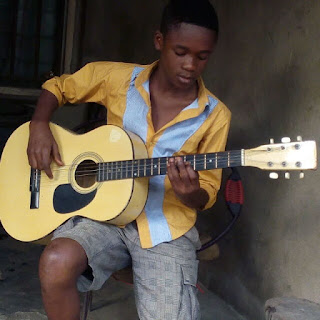 Vibrato effect: I call it the vibrato effect because the sound is going to reverberate in a up and down way. How do you do this, you simply sound whatever note you want to play and while holding it slide it upward and downward in a uniform manner, sometimes you can slide it up only for a long period to really feel it or vice versa; people who play the blues use this technique very
much.

Hammer-on and pull-off: This is when you are holding a note on a particular string and without plucking the string you use your finger to tap the next note to play it, that is called the hammer-on.

The Pull-off technique is like the opposite of the hammer-on. It’s like releasing the second note that you hammered. When you are holding two notes on a particular string, releasing the higher note makes it a pull-off.

Slides: This technique is very very important, it makes you feel like a pro whenever you are soloing. Let’s assume you want to play a note, for example C, the note before C is B, so instead of playing C directly, instead play B and immediately slide to C. You can do it for subsequent notes, just makes sure it sounds cool. You can even decide to do that and add the vibrato technique.