There are basically two types of suspended; they are:
sus4 and sus2

The numbers beside the sus in the two types above refer to the numbers in the letters of music. Look at the illustration below: 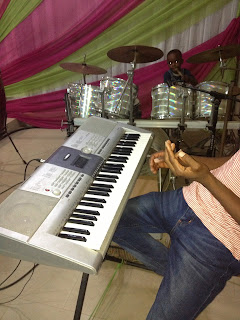 So how do the suspended chords work?

The suspended replaces the major third in a chord with either 4 or 2.

Likewise to make this same chord a sus3 chord, the major third which is E will be replaced with the fourth which is F(look at the illustration above to understand the third, second and fourths). So we would have

A chord without out a major third like C  G is called an “open fifth”.

So while you are playing suspended chords, it is necessary that you resolve back to a major chord.

A song that has the 1 4 5 1 progression, which is doh fah soh doh, can use suspended chords without having to move too far