This is how to play your major and minor chords(doh, reh mi fah so la ti do) any where on the neck or fret board of the guitar. When many of us started to play the acoustic, we were only taught to play the open chords on the key of C, which is not good enough, because 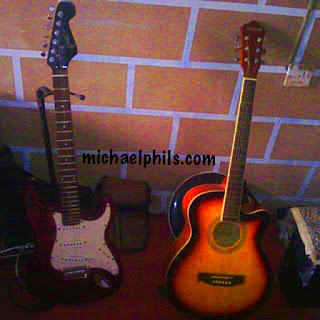 its only on the key of C. Although many of us learnt how to use the Capo to play on other keys; but still that’s not still good enough. Many websites that you visit use letters to tell you the about the chords, but the way most of we Nigerian’s learnt music is by ear; and its pretty difficult for us to understand the chord patterns that the westerners upload unto their website.

So I’ve improvised some chords that you can play on your guitar;
they are the C, Dm, Em, F, G Am, B.
In other-words they could be written as doh, reh, mi, fah, soh, lah, ti.
In the chord diagrams that I am about to show you below, look at the doh chord carefully and take note of the root note. The root note is C(doh). Also take note of the fret number(whether its the 1st fret, 2nd fret and so on).

Also note that as you start playing the chords, they might not sound right, you would just have to keep rehearsing so your fingers would build the muscles to play the chords. After a few days, you would see that they would sound clearly.

This is a video illustartion of how you can play it, dont forget to use this post as a guide too: 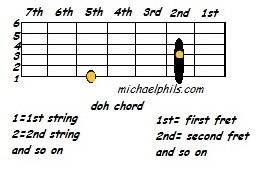 The image above is the doh chord, the orange color depicts the root note which is C(doh). 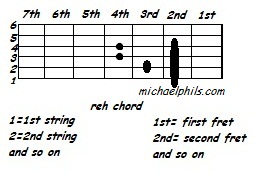 The second image above is the reh chord. 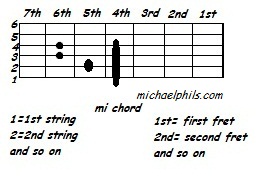 The third image above is the mi chord, all you have to do is to shift the reh chord by two semi-tones; as you can see that it is the same shape, i just shifted from the second fret to the fourth fret. 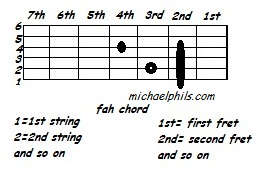 The next image above is the fah chord starting on the second fret. 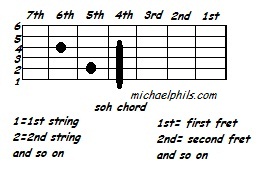 The next image above is the soh chord; as you can see again, its the same shape with the fah chord, I just shifted from the second fret to the fourth fret. 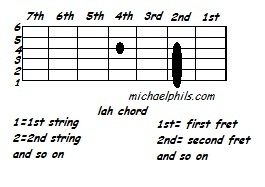 The next image above is the lah chord. 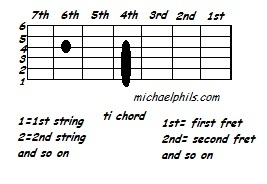 Then the ti chord is just the same shape with the lah chord, I just shifted it from the fourth fret to the fifth fret.