How to play full barre chords on your guitar when you have your root note on the sixth(6th) string. 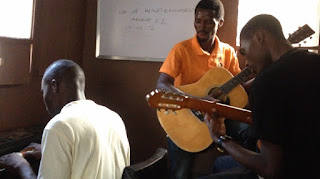 Assuming it is convienent for you to accompany a song when the root of the song is on the sixth string of yout guitar. How do you do that?

Get our rhythm guitar ebook for beginners that want to become professionals in a month
We would be giving you chord shapes, these chord shapes would make it extremely easy for you to play any chord for any note.

The three chord shapes that we would be giving you today is that of the Major, Minor and Diminished. With these chord shapes, you can play the chord tone scale; I mean “d r m f s l t d”
Barre chords on the sixth string. By now you should know that the sixth string is the thickest string on your guitar. Now we want to learn to play chords taking your root note from the sixth string. Every chord has a root note.
For example the C major chord    C E G has a root, the root is C
So let us begin,
It is easy to play and know your chords on the guitar because you just need to memorize how the shape looks like.
First of all, do you remember how to play the major scale on every string?
We learnt how to do that in one of our previous lessons. You can do a quick revision. We would give you an expo here:
C   D   E   F   G   A     B   C
d    r    m   f    s     l      t     d
Our root here in the diagram above is in the key of C,
From C to D to E to F to G……Technically we are moving from right to left in the diagram above.
We have different types of chords. For a start we would be looking at mainly major, minor and diminished chords.
Generally, in most songs construction
D    r    m    f    s     l       t        d
M   m   m   M  M  m    dim    M
M – major
m – minor
dim – diminished
Now that is why we would be looking at the major, minor diminished chords basically.
It would be like that for all other chords on other strings that we would be looking at.
Now back to the main business:
When ever you want to play:
doh – you would use the major chord shape
reh – minor chord shape
mii – minor chord shape
fah – Major chord shape
soh – Major chord shape
lah – minor chord shape
tii – diminished chord shape
doh – major chord shape